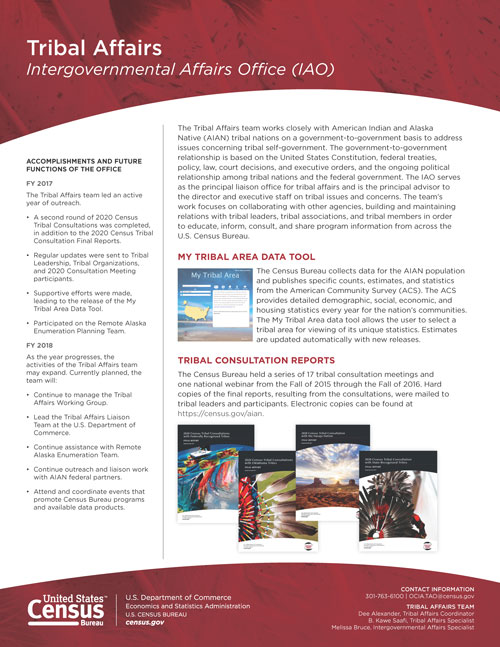 Why is it important for Tribal Community Members to respond to the 2020 Census?

The information collected by the census is an important tool for federal and tribal decision-making. The U.S. Constitution requires a census every 10 years to determine how many seats each state will have in the U.S. House of Representatives. Census data also help guide how billions of dollars in federal, state, and tribal funding are distributed. Accurate census data leads to fairer allocations of funds that support tribal programs in meeting community member needs.

Census data help tribal leaders understand what their communities need. Many tribal communities use census information to attract new business and plan for growth. In fact, many tribes and tribal organizations use census data to plan new facilities and programs for the communities they serve.

Census data also play a key role in the fair distribution of billions of dollars to tribes and American Indian and Alaska Native (AIAN) people across the nation. Federal funding for Indian schools, Indian education programs, Indian health programs, Indian housing programs, water and sewage projects, roads, and economic development are distributed on the basis of data collected by the Census Bureau.

Activities in past censuses have included outreach and education to increase awareness and generate support and participation from the general public, tribal and local governments, organizations, media, and businesses. Special emphasis is placed on outreach to populations with historically low response rates and histories of being undercounted. All partners are given guidance, such as census promotional materials and lists of potential activities they can use to promote the census within their communities.

The Census Bureau developed the Tribal Governments Liaison Program to manage the important work done with AIAN communities. At its peak during the 2010 Census, the Partnership Program employed over 3,500 partnership staff, including AIANs who worked in their tribal communities to help promote the census.

What is the Tribal Governments Liaison Program?

Tribal leaders will be requested to designate a tribal liaison to serve as their representative during all phases of the 2020 Census. Tribal officials and their tribal government’s liaison will serve as facilitators and sources of information between the tribe and the Census Bureau. In prior censuses, tribal liaisons were a vital source of knowledge about community and cultural issues, as well as serving as a bridge between the Census Bureau staff and tribal communities. This liaison’s knowledge and insight contributed to the success of this program.

How Can Tribal Community Members Help with the 2020 Census?

How Can Tribal Governments Help?

Tribal governments can help provide employment opportunities for members and support the Census Bureau’s work by:

Also, representatives at the National Congress of American Indians talk about the importance of being counted and what it means to participate in the 2020 Census. View PSA.